You need to know that scientists talk about the planet Hercolubus (Planet X) or Red Planet. The first of these was the astronomer Chilean Carlos Muñoz Ferrada. This astronomer began to speak of the planet Hercolubus in 1940, that is to say, 43 years before the famous article on Planet X, appeared in the American newspaper The Washington Post in 1983. It is very remarkable that Carlos Muñoz Ferrada speaks of a gigantic planet-comet, planet because it has the mass of a planet and comet because it has the elliptical orbit of a comet. Remember the Mayan prophecies, according to Fernando Malkún the sixth Mayan prophecy tells of the arrival of a comet that will endanger the very existence of man.

I made ​​a French adaptation of a text of the magazine "El Florecer Aureo" (in French The Golden Blossom), No. 15, entitled Monographic on Hercolubus: Planet intruder . I put my personal opinions brackets. 's first new "not informal" on Hercolubus Regardless of what the different theories, more or less "scientific" does not say on new astronomical discoveries, we are interested, too, investigate the "esoteric" information to deepen about Hercolubus. Early news approchement an intruder planet in our solar system, the self-taught astronomer from Chilean Carlos Muñoz Ferrada (died in October 2001 at the age of 92 years). On 11 June 1940 he announced to the world the existence of this planet he called "Planet-Comet" because it has the mass of a planet with the orbit of a comet. Mr. Muñoz Ferrada s is made ​​known in his country, in a lecture he gave to the city of Concepción, in December 1938, at the age of 29, when he surprised the audience with the announcement of an earthquake land would on 24 January 1939 to 23 h 25, the city of Chillán, Chile. Nobody thought. It was considered a dream because it is based on a theory that belongs to him, "Geodynamics". And January 24 [32 to 23 h, according to the Spanish Wikipedia] there was an earthquake that left 30 000 dead. 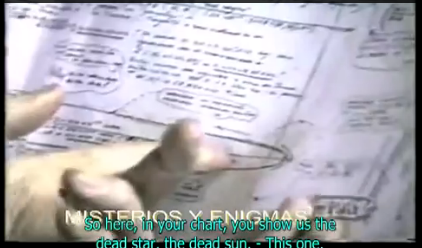 His astronomical and geophysical predictions made ​​him famous. Later he predicted other earthquakes such as the 1945 Ligua [ie earthquake occurred March 28, 1965, I think the publisher was wrong with the date] and the 1985 [ie earthquake occurred March 3, 1985 in Santiago], Chile. He also announced the trajectory and suffer disruption of Halley's comet, changing its speed, which s' occurred when the Halley walked 36 hours of its orbital period, to 85 kilometers of the Sun, the shortest distance in its history. To explain their observations and predictions, Carlos Muñoz Ferrada developed the theory of geodynamics , which is based on the attractions of the heavenly bodies, large explosions in the Sun and the cycles of geophysical disturbances. With this method he predicted earthquakes, volcanic eruptions, climate change, he discovered new planets and comets, deciphering their trajectories and other features. few people who visited Mr. Muñoz Ferrada at his home in the quiet Villa Alemana of Viña del Mar have seen there, in his laboratory, surrounded by strange devices developed and designed by himself, he had a special gift: the gift to enter into trance when he was researching and that, in this state, he wrote and drew what he received, and that it gave him much success as enemies throughout his life.

Ferrada Carlos Muñoz has stated that this "Planet-Comet": 1. It has an elliptical orbit like a comet and a large mass such as a planet, that is to say, a planet with a tail. 2. She approaches the Earth charged with cosmic energy. 3. Does not meet the heavenly laws established. 4. She travels between our Sun and Black Sun located 32 billion kilometers. 5. This will increase to 14 million kilometers from Earth. 6. It will eventually enter our solar system and will be seen with the naked eye and photographed. 7. His arrival will cause a geophysical and human change, bringing change and destruction. He provided us with other data in the television and multiple media. These data are the following: - 92 km / s = speed of the planet Hercolubus turning around the Black Sun. - 76 km / s = speed of the planet Hercolubus when it revolves around the Sun in the Solar System. - 300 km / s = speed of the planet Hercolubus halfway two suns. - 14,000,000 m = closest to the Earth in the path of the planet Hercolubus Point. - 32000000000 m = distance from the Sun Black Earth. - 0.003382378 s = Distance in light years from the Earth to the Sun Black. 385,000 m = Distance of the Moon to the Earth. - 300 000 km / s = speed of light. 9 460 800 000 000 m = distance traveled by light in one year. - If the planet-comet is 14 million kilometers [of the earth], then it is equivalent to 36.36 the distance of the Moon to the Earth. Apparently it is not enough to prevent catastrophe. We transcribe an extract of the report sent by Carlos Muñoz Ferrada Brian Marsden of the Harvard-Smithsonian Center for Astrophysics (specialists comets), Cambridge, Boston, Massachusetts, United States [j ' I made ​​a literal translation, respecting the style of the author]: "And at the same time, the undersigned has included calculations, illustrations, sidereal positions, he has also calculated, and he has already expressed June 11, 1940, the slow penetration of the solar system, a new and brilliant cosmic mass approaches the Earth, a huge "Comet-Planet" (it has an elliptical orbit like a comet and a large mass such as a planet), strong vibrations, heavy, large electromagnetic field as three times that at the speed planet Jupiter, high, it is vertical [literal translation] in the earth elliptical and it travels in the forward direction in an elliptical orbit in time 13 years 333.3, 133.3 centuries between our Sun and the Black Sun a distant dying star that is 32 billion kilometers. "This large star that is now enter a large eccentricity of 0.99999 and an average angular movement 0.0000739 per day at the same time: 12 average angular conjunctions [literal translation] big news and distant planets: more X XI with its gravitational perturbations in equivalent to a full course of 13 years equal eccentric orbits 333.3 (1 125.6 x 12) 173.9 years of Comet Planet large mass and electromagnetic field. "This great star, who comes to Earth with a uniformly accelerated rate, will soon located near the North Pole, north of Corona Borealis, to the Little Dipper in the equatorial sidereal coordinates with right ascension equal to 15 hours 15 minutes and a more equal declination 67 degrees 20 minutes .. northern and Thursday [Friday] August 11, 1999, DC, that is to say, in the 15 years from 1984, this star that will shine even in daylight, this date will be in conjunction: Sun Comet-Earth-Moon-in 11:22 minutes Universal Time. Meanwhile, it will be the day of the great eclipse of the sun reddish. At this time, this mysterious planet will be in perigee just 10, 5 million kilometers from the Earth ... " Obviously, Mr. Carlos Muñoz Ferrada erred in this latter date; perhaps he was mistaken when he made ​​some calculations, but will still be significant all the information, Since 1940, he passed the mysterious "Planet-Comet" ... Extension of the original article (April 2012) I decided to transcribe the final two paragraphs of the extract from the report sent by Carlos Muñoz Ferrada Brian Marsden [I made ​​a literal translation, respecting the style of the author]: "The sun will rise inside the orbit of the Earth with a satellite speed of 66 kilometers per second, and at the same time, at that time, its perihelion only 139,100,000 km from the Sun. "In addition, the undersigned, it is also in the scope of probabilities, determining that this new and attractive gigantic cosmic mass can reach straighten the axis of the Earth with great gravity and geophysical disturbances and even, it may affect the attraction field of our satellite Moon. The Earth's elliptical orbit is parallel to the Celestial Equator. The two poles removed at the same time, as in the days of the equinoxes of spring and autumn. "